Why was our landlord Brian rescuing soap stars off Anglesey!?? 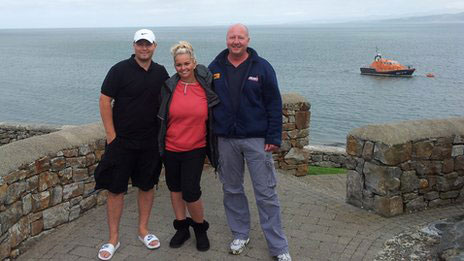 Actress Jennifer Ellison and her husband were rescued by lifeboat crews when their boat’s engine failed while they were sea fishing off Anglesey.

The former Brookside star and husband Robbie Tickle were towed ashore by the RNLI in their inflatable at 11.30 BST.

Ms Ellison said on social networking site Twitter: “Just been sea fishing with my hubby!! Needed to be rescued!!! Terrifying! Thanks so much RNLI!”

The 16ft (5m) boat had begun drifting towards Moelfre island when a lifeboat was launched, the RNLI said.

Mr Barclay said: “At the time of the rescue we didn’t realise it was Jennifer on board, but after all the interest it has generated I wanted to thank her for helping to raise awareness of the work of the RNLI charity and for showing her gratitude to the crew.

“They had the misfortune of suffering engine failure whilst out sea fishing but were towed back in without any complications.”

Ms Ellison, of Liverpool, is best known for her roles in Channel 4 soap Brookside and film Phantom of the Opera.

Brian claims he was at work and this is his doppelganger!!