Can the Olympics factor transform Weymouth?

It worked for Barcelona, so can it work for the quiet Dorset town? With new attractions and a thriving food scene change is well under way. 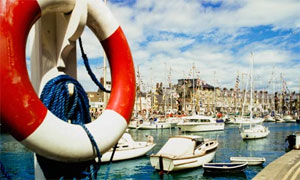 “It was 12.46pm on Wednesday 6 July, 2005. That was the moment we got the announcement, when Weymouth changed forever.”

Jacqui Gisborne, of the Weymouth and Portland 2012 operations team, is telling me about the moment the Olympic Games were awarded to London. From 29 July, Weymouth and Portland will host the sailing regattas, and Gisborne sees a chance to present this pretty Dorset town in a whole new light.

That new light shines brightest around the harbour. The narrow lanes of the old town, south of the Wey estuary, are a jumble of Victorian, Georgian, and occasional Tudor architecture, with the odd craft gallery, a couple of sleek B&Bs, and plenty of pubs. Multicoloured harbourside buildings lead down to a quaint port. The whole effect is a bit Breton. Crab, scallops, and lobster are landed here by a fleet of about 40 boats.

Food is at the heart of Weymouth’s rediscovered buzz. The Dorset Seafood Festival (dorsetseafood.co.uk) takes over the town on 7–8 July. The Stable on Custom House Quay (01305 789389, thestabledorset.co.uk), opened earlier this year serving “Dorset pizzas” loaded with local produce, plus 57 varieties of scrumpy and perry on usually packed communal benches. On 1 July, it will add an all-day pop-up seafood bar, Salt, inside Brewers Quay, a 1904 warehouse. The Harbour Bridge (19 Trinity Road, 01305 772023, harbourbridge.co.uk) restaurant opened this month and offers a daily fish menu right off the boat.

It’s a warm day and I’m glad of a pint of local Jurassic ale at the Red Lion on Hope Square (theredlionweymouth.co.uk), opposite Brewers Quay. Plans to redevelop this area after the Games include the opening of a boutique hotel. Weymouth could use more upper-end accommodation, so that feels like a timely gamble on a town that has been chronically undersold. One hotelier suggests a long-standing local “lack of ambition”.

The district north of the Wey, across Town Bridge, feels like a different town. And it once was. This used to be Melcombe Regis, until it amalgamated with Weymouth, to the south, in 1571. The resort was popularised by King George III, famous for its sheltered bay, handsome Esplanade and crescent of golden sand. These are in better shape than ever, though the rest has faded from its Victorian prime. There’s a bit of seaside cheese and the odd misguided development, but away from a couple of identikit pedestrian precincts, the low-rise grid of terraced backstreets retains plenty of charm. And there’s that beach. Shelving gently, it is perfect for families.

A statue of George III on the prom has been freshly scrubbed. A clock commemorating Queen Victoria’s golden jubilee, in 1887, likewise. In fact, Gisborne estimates that “around £250m of public and private money” has been invested locally since 2005. The most prominent investment rises above the Pavilion: Merlin Entertainments, owner of Legoland and the London Eye, spent £3.5m building the Weymouth Sea Life Tower, a giant glass donut impaled on a 53m knitting needle. It opens on 22 June (tickets from £6.48 at weymouth-tower.com) with 15-minute rides in a revolving viewing platform offering views along the Jurassic coast, which stretches from Orcombe Point near Exmouth in east Devon to Old Harry Rocks near Swanage in east Dorset.

A 20-minute bike ride round the headland and Nothe Fort (now a museum, nothefort.org.uk), ends at the Crab House Café (Portland Road, 01305 788867, crabhousecafe.co.uk). Sustainable local catch rotates twice daily on the shack’s chalkboard menu – flounder in a sticky ginger sauce was spot-on when I last visited. Competition will arrive on 14 July, when Mat Follas, MasterChef winner and owner of the Wild Garlic in Beaminster, opens his family-friendly Chesil Beach Cafe (chesilbeachcafe.co.uk) right across the lagoon.

The isle of Portland dangles from here by a sliver of causeway offering ideal walking terrain. But it has plans to become the south coast’s premier learn-to-sail venue. From 2 September SailLaser (sail-laser.com/weymouth) will offer courses based at Osprey Quay, Portland’s £70m Olympic marina. The isle is still viewed with suspicion by some Weymouth folk. That could be down to the two phantom dogs that reputedly roam the land at night, or perhaps to Portlanders’ odd aversion to bunnies – it’s considered bad luck to speak the word “r-bbit” on Portland.

Above the new marina, Tout Quarry is now a sculpture park. Portland’s famous limestone built St Paul’s Cathedral, and here in the quarry, old boulders have been worked over three decades into 70 sculptures, some by top names such as Antony Gormley. It’s all wildflowers and scruffy charm. I hear chisel on stone: it’s the Portland Sculpture & Quarry Trust (learningstone.org), which runs outdoor sculpting courses every summer. Its new exhibition space at nearby Drill Hall Gallery is hosting an arts festival, Stone Island 2012, part of the Cultural Olympiad by the Sea (maritimemix2012.co.uk, until 9 September).

I climb to the coast path above Chesil Cove. To my left, an 18-mile bank of stones fronts a stretch of water nicknamed Dead Man’s Bay. An intermittent roar, as the treacherous current clatters a million pebbles onto Chesil Beach, is all I can hear. To my right lies the port that will be the centre of the sailing world for a few weeks this summer. If all goes to plan, Weymouth will be in the spotlight for more than just a couple of weeks.

“Barcelona after 1992 is the model,” says Gisborne.

Nobody can accuse Weymouth of lacking ambition any more.